The Dog Factory: Inside the Sickening World of Puppy Mills

RollingStone: An investigation into the underworld of America’s overcrowded dog farms, the secret shame of the pet industry. 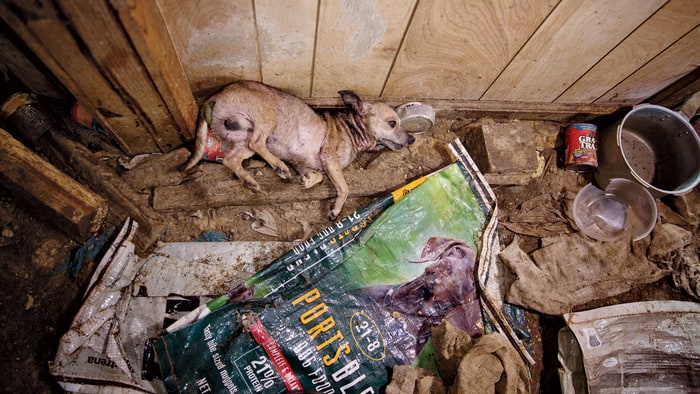 Every year, tens of thousands of dogs are born into the filthy conditions in unregulated puppy mills nationwide. Amiee Stubbs

The house on Hilton Lake Road was unremarkable, a brick one-story with an under-watered lawn and a scrimshaw of patchy shrubs. It was flanked by bigger and smarter homes on a two-lane strip in Cabarrus County, 25 miles north of Charlotte, North Carolina, but nothing about it suggested to passersby that inconceivable cruelty lived at this address. It wasn’t till we opened the side-yard entrance that the horror inside announced itself. A stench of complex poisons pushed out: cat piss and dog shit and mold and bleach commingled into a cloud of raw ammonia that singed the hair in our nostrils. Twenty of us – blue-shirted staffers from the Humane Society of the United States (HSUS); several members of their forensic camera crew; the sheriff of Cabarrus County and his deputies; and a contingent of veterinarians from a local animal hospital – tiptoed around the filth underfoot into a house caked in pet fur and waste. Damp laundry draped across every flat surface; the floor was a maze of cat crates and garbage. From somewhere in the house, we heard the howling of dogs, but they weren’t in the bedrooms or the tumbledown john or the kitchen piled high with dishes.

Then we found the door that led to the basement. Down there, dozens of puppies in dust-cloaked cages stood on their hind legs and bawled. There were Yorkies and poodles and Maltese mixes, but their fur was so matted and excrement-mottled it was hard to tell which from which. Bred for profit, most of them would have been sold in pet stores or on websites by their third or fourth month of life.

HSUS staffers had gathered evidence that the breeder, Patricia Yates, was selling puppies on multiple websites without a license, and had a stack of buyer complaints lodged against her. But it took a tip from an anonymous source to alert the Sheriff’s office to the scale of Yates’s operation. “We’d been out there before, but had no idea it was this severe,” says Lt. David Taylor, an animal-control cop who helped launch the investigation. Obtaining an arrest warrant was the least of it, though. When you bust an illegal kennel, you’re suddenly swamped with sick dogs, often double what had been reported. It took Taylor a month to coordinate with HSUS – the rare non-profit with the money and equipment to house and treat puppy-mill rescues – before launching the raid on Yates’s kennel. 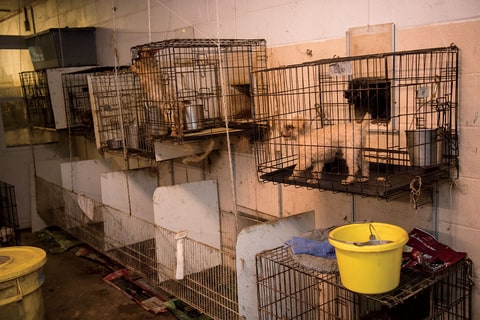 Back up the stairs, we followed more barking to a porch bricked in by the owner. It was pitch-black inside, and the smell was a hammer. Here were the parent dogs in desperate shape: blinded by cataracts and corneal ulcers; their jaws half-gone or missing entirely after their teeth had rotted away. Some were so feeble they couldn’t stand erect; their paws were urine-scalded and their wrists were deformed from squatting on wire their entire lives.

Out the back door and up a dirt trail, the worst was yet to come. A cinder-block kennel, hidden from the street, housed the bulk of this puppy-mill stock: 50 or 60 more parent dogs who’d likely never seen sunlight or spent a day outside this toxic room. They wept and bayed and spun in crazed circles as we toured the maze of cages. Some went limp as the rescuers knelt to scoop them. Each was photographed, then carried downhill to the giant rig at the curb. There, teams of vets from the Cabarrus Animal Hospital worked briskly to assess each rescue. Once triaged and tagged, they were loaded into crates on the Humane Society’s mammoth truck, an 80-foot land-ship with clean-room conditions, and taken to a staging shelter. One hundred and five dogs came out of that house, many of them pregnant or in heat. I turned to John Goodwin, the director of the puppy-mills campaign for HSUS, and asked him how many puppies sold in this country – at Petland and Citipups and a thousand other pet stores – come from puppy mills as dire as this one.

“Most every pup sold in stores in America comes from this kind of suffering – or worse,” he insists. “If you buy a puppy from a pet store, this is what you’re paying for and nothing else: a dog raised in puppy-mill evil.” The American Society for the Prevention of Cruelty to Animals posts a database of pet shops for consumers to check before they buy. Input any ZIP code and you’ll see the list of stores that sell pups rather than offer them for adoption. That vastly ups the chances that the dogs are from mills, not from reputable breeders. Another click shows you ghastly shots of the mills those stores buy dogs from. Those pictures weren’t taken by animal-rights zealots, but by United States Department of Agriculture agents who inspect breeding kennels. Pet stores usually buy their dogs from federally licensed breeders, meaning kennels with five or more breeding females that breed a lot of pups. “Puppy mills house breeding dogs in small, wire-floored cages, separate puppies from their mothers at a very young age, and ship them hundreds of miles to pet stores around the country,” says Matt Bershadker, president and CEO of the ASPCA. (Both Petland and Citipups deny they sell mill dogs, but reams of evidence and buyer complaints collected by HSUS argue otherwise.)

Yates was arrested and charged with animal cruelty. (Twelve counts were filed against her; a hearing is scheduled for February.) Yates was outraged; I heard her exclaim that “these dogs are the love of my life!” That evening, I caught up with Sára Varsa, the senior director of operations for animal rescue at HSUS. Varsa, a veteran of 50 animal-welfare raids, was quarterbacking the care of those hundred-plus dogs at a temporary shelter in a warehouse. When told what Yates had said, Varsa pointed to two poodles, both of them desperately underfed. Delicately, she lifted the male from the crate and put him, trembling, in my arms. He was blind in both eyes and had thumb-size infections where his molars used to be. “Is this how you treat the dogs you love?” said Varsa. “Is this how you raise your beautiful babies?”