Man takes his dog, dying of cancer, on one last, epic road trip

It was the worst possible news you could get about your best buddy.

Bone cancer, so a leg is amputated. But it gets worse; cancer’s spread to the lungs. Now it’s a terminal condition. So what do you do?
Robert Kugler decided to take his best friend — a three-legged chocolate lab named Bella — on one last, legendary ride.
“This is one of the biggest connections I’ve ever had to another living being. I don’t care that it’s a dog,” said Kugler, who’s from Broken Bow, Nebraska.

Kugler found out last year that Bella was dying of cancer. He had adopted her as a puppy nine years ago and wasn’t anyway ready to let her go.
“I just didn’t want her to be gone one day when I came home,” he said.
So Kugler began with Bella a trip of a lifetime. Kugler’s a Marine vet, so they headed off to Chicago back in November to the Marine Corps Ball.
His social media feeds — Twitter, Facebook and Instagram — documented their travels as they headed from there to points east and south: Bella posing in front of a mural in Detroit, getting petted by some Salvation Army bell ringers in Bowling Green, Kentucky; checking out the sunset over Lake Erie; 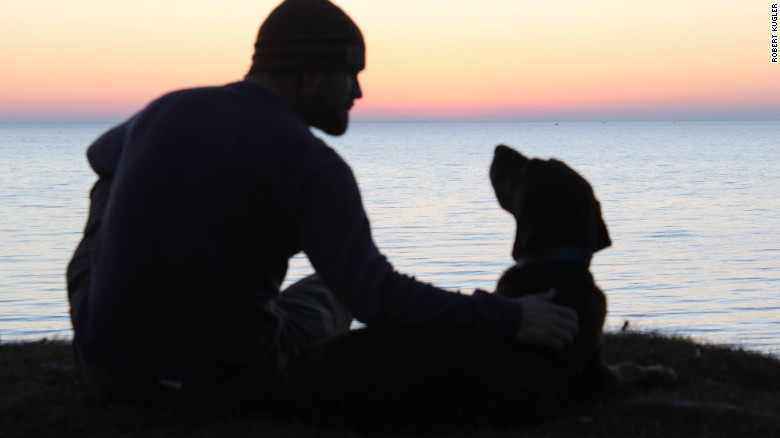 rolling around a park in Cleveland; 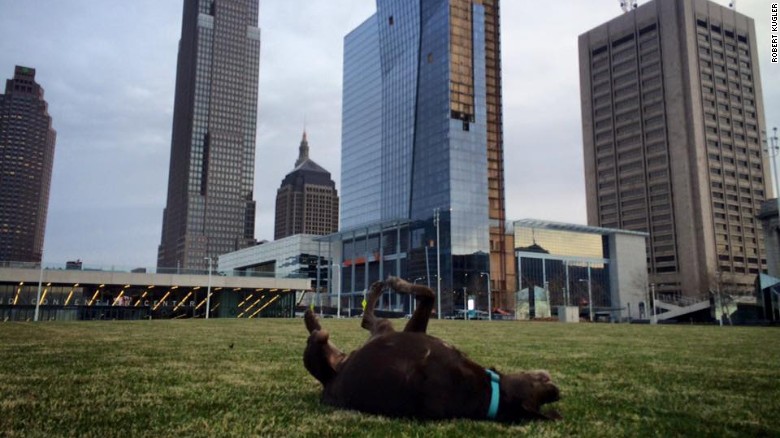 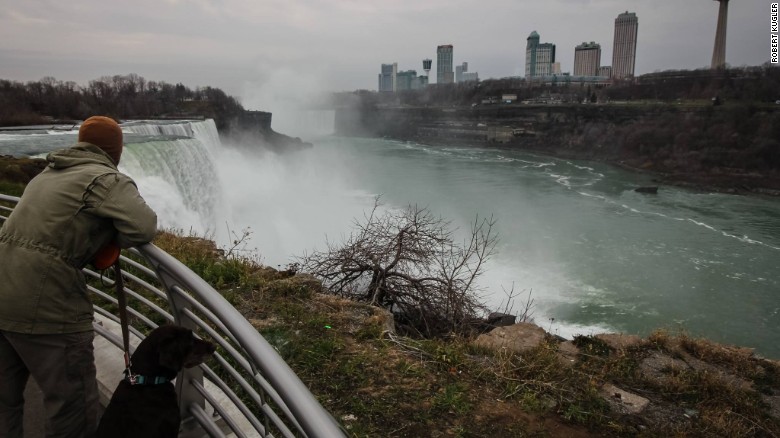 standing atop a rock in the Adirondack Mountains in New York; 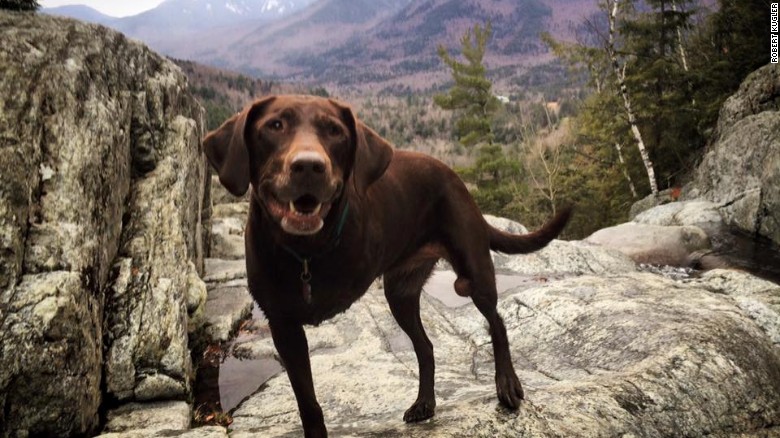 hanging out at Harvard; chilling in front of Boston’s Fenway Park; 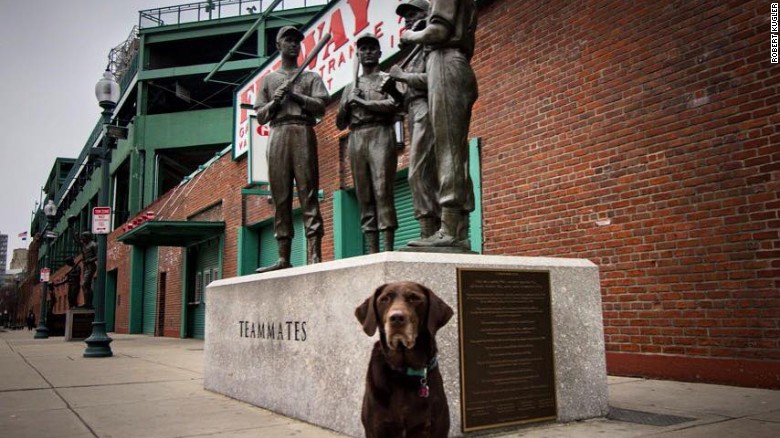 cruising through the streets of Philadelphia and exploring the Lincoln Memorial in Washington. 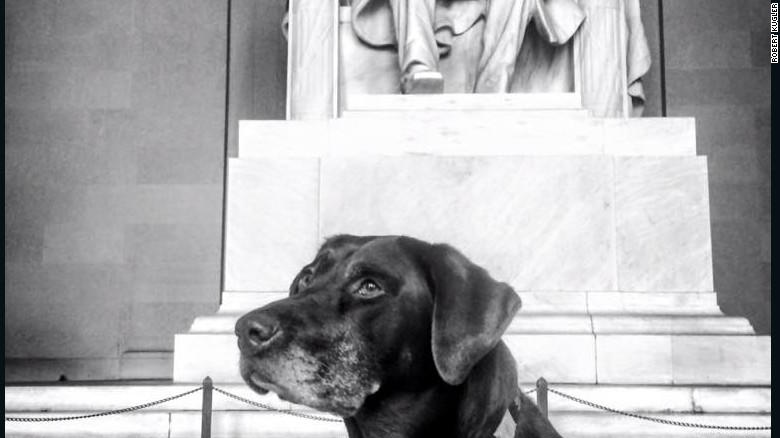 Bella and Kugler have either camped out in his Toyota 4Runner or couch-surfed with his friends along the way. Kugler’s doing this trip, not just for Bella, but for others too.
“I want to inspire people to get outside and live,” he said. “Love each other for who we are and make friends.”
They’re now in Florida, on the Gulf coast side, enjoying St. Petersburg and the white sand beach in Siesta Key. Well, not totally enjoying them, since the Sunshine State’s intense heat is pretty rough on Bella.
“The cold is easier to combat with a dog than the heat,” Kugler joked. He says the waters are so warm in Florida right now that they’re not exactly “refreshing” to her.
So now Kugler’s thinking of heading west, stopping for a bit back home in Nebraska before introducing Bella to the nation’s majestic national parks, like Yellowstone and Yosemite. He hasn’t really planned it out with too much detail. And that’s part of the charm of this long goodbye.
“Continuing to move and see the country is a good excuse to spend time with my dog,” he said. Being spontaneous can sometimes be a headache, since it means spending a huge amount of time “figuring out where we’re going to sleep,” but it also means enjoying unplanned little adventures.
“You come across a little gravel road and wonder, ‘where does this go?'” So you make the turn and find out, Kugler said.

Doctors gave Bella just six three to six months left to live last year; she’s survived much longer than that, but Kugler knows Bella’s time is drawing short. He said a few weeks ago, he watched her, playing in the waters on a beach and envisioned a peaceful end for her.
“Some days I’m completely prepared. I pictured her just swimming out to sea,” he said. “But there’s other days when I’m like, oh my God, I can’t bear the thought of it.”
But whenever and wherever it happens, he’ll be with her. It’s part of the job of being best buds with a dog.
“We take on these animals, which means we’re gonna take on their life and their passing,” Kugler said. “To be there with them when they pass is the greatest gift you can give anybody.”
When Bella’s gone Kugler said he’ll volunteer more, like he has in the past for organizations that help veterans, like Team Rubicon and Team Red, White & Blue. And yes, he’ll continue to hit the open road.
“I want the freedom to travel. I don’t want a home that’ll keep me in one spot.”
Until then, Kugler thinks we should all be a little more like Bella: “Wag more; bark less.”
This article originally appeared on cnn.com.
Share